You are here: Home1 / Institute2 / where IGM PV

How to reach IGM Pavia 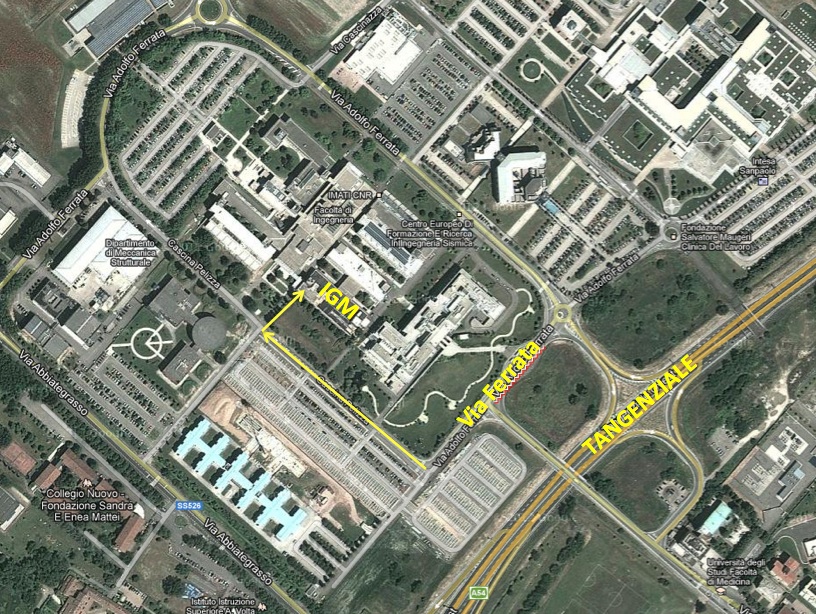 BY CAR
A7 Milano-Genova motorway
From both directions, exit at Bereguardo-Pavia Nord, take “Tangenziale Ovest” and exit at “Istituti Universitari”

A21 Torino-Piacenza motorway
If you arrive from Piacenza, exit at Broni-Stradella and follow the signs for Pavia (SR 617 Bronese). Take the “TANGENZIALE OVEST” of Pavia

From Pavia railway station by bus

Line 3. Stop in the square in front of the train station: direction Maugeri / Colombarone, get off at the Ferrata / Tangenziale stop.
Line 7. As for line 3, direction Maugeri / Mondino, same stop (Ferrata / Tangenziale).
Line 6. Stop behind the train station in via Brichetti, reachable from the underpass next to the station itself. Direction Cascina Pelizza. Abbiategrasso Volta Institute stop.

The bus service in Pavia is operated by the company Autoguidovie. Tickets can be bought at most newspaper kiosks and tobacconists, online or by the Autoguidovie app.

Pavia can be reached by train or by shuttle bus / train combination from the airports of Milan (Linate, Malpensa) and Bergamo (Orio al Serio).

Because these cookies are strictly necessary to deliver the website, refusing them will have impact how our site functions. You always can block or delete cookies by changing your browser settings and force blocking all cookies on this website. But this will always prompt you to accept/refuse cookies when revisiting our site.